Fonterra's profit is down but revenue has risen.

New Zealand's largest company Fonterra has posted an after-tax profit of $745 million, down 11 per cent on last year. Federated Farmers dairy group chairman Chris Lewis described it as a "good solid result". "It's putting more cash into farmers' hands and that will put a smile on their faces for the coming season. And it's good for rural businesses that depend on dairy."

Craigs Investment Partners research analyst Adrian Allbon said it was in line with his expectation. 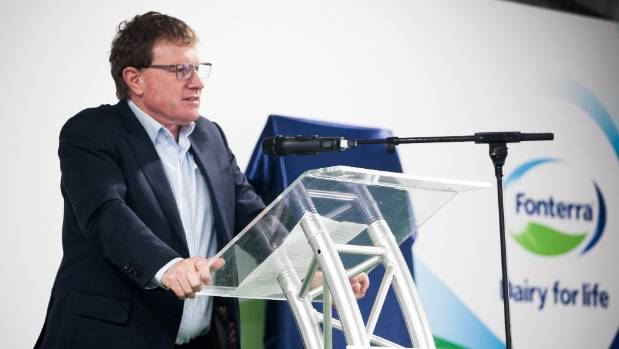 Fonterra chairman John Wilson has hailed the progress of the value-add side of Fonterra's business.

"They've had to deal with a big swing in milk streams so it's a good result."

Fonterra's Chinese farms, which have shown a loss for the past few years, were back in black, but the investment in Chinese partner Beingmate had cost.

"They've taken a $35m impairment and their share of the losses of Beingmate was $41m, so together that's $76m, but it's a sentimentality issue rather than a major profitability issue," Allbon said. "They've been paid considerably more for their milk, while only seeing a modest fall in the profits of the company they also own."

Penny said the current season would provide a better test of Fonterra's financial performance, because it expected to post similar profits over the season compared to the season just gone.

"With the milk price likely to be circa 60c higher, this would indeed be a step up in financial performance."

Chairman John Wilson said the co-operative had made significant  progress in the value-add side of the business.

"Despite lower milk volumes due to poor weather in parts of the season, the business delivered a good result by prioritising higher value advanced ingredients and growing our sales of these in-demand and specialised products by 473 million litres this year."

"Our consumer and food service business continues its strong performance. This year we sold more than 5.5 billion litres, an additional 576 million litres on last year. This volume growth across these two portfolios has delivered normalised EBIT of $614m, an increase of 6 per cent on last year," Wilson said.

Chief executive Theo Spierings said Fonterra had prioritised higher margin products and tapped into the expertise of staff to come up with innovative ways to generate higher returns.

It had commissioned or announced new investments including new UHT lines at Waitoa, butter and cream cheese expansions at Te Rapa, construction of the its largest mozzarella plant at Clandeboye, two new cream cheese plants at Darfield, and the reopening of its cheese and whey plants at Stanhope in Australia.

Fonterra's balance sheet remains in a strong position. Debt reduced by $900m to $5.4 billion, while it maintained its gearing ratio at 44.3 per cent.

< Back to all news articles

Dairy co-operative Fonterra has announced plans to make it easier for more dairy farmers to get into their own farms, and to grow with the Co-op, by extending its MyMilk…

Your search for didn’t return any results.